Megan Sterling started her lecture last Thursday at Anchor with a lot to share from her three weeks in the studio. She approached her residency with the idea to utilize printmaking’s potential as a medium of multiples, with a plan to bring color into her drawings. 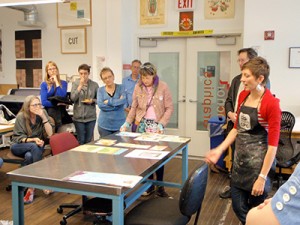 Sterling is interested in the ideas surrounding fragmentation, whether of the figure, an image, or a narrative. She enjoys abstracting her personal stories to create an ambiguous visual narrative, using color as a symbolic signifier. Her visual narratives often incorporate iconic fantasy images, as well as commonplace motifs such as knots and windows. These familiar yet open-ended shapes and images enable her to play with composition and color as she combines images into unusual and haunting vistas. 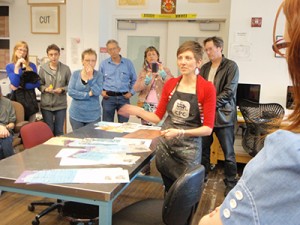 As she began her residency, Sterling felt she wanted to move away from the rigidity and controlling aspects of some of her earlier work, so she decided to experiment, expanding on the lexicon of her imagery by working on top of it. Her layering created one of kind results that were not always predictable, but ultimately as pleasing as they were surprising. 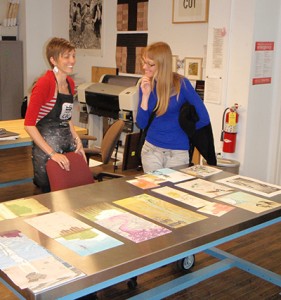 For more information on the artist, click here. Anchor Graphics’ second resident artist for this summer is Mary Jones, who will be at work at Anchor from June 3–24. 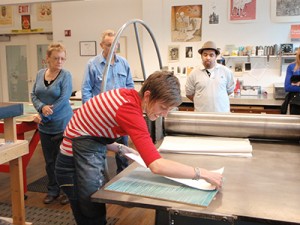