The Minnesota Center for Book Arts (MCBA) has named InterArts Professor Clifton Meador’s work A Repeated Misunderstanding of Nature the winner of the annual MCBA Prize 2013. Meador’s work was chosen from among five finalists by jurors Sarah Bodman, Buzz Spector, and Sandra Kroupa. There were over original 190 submissions sent from around the world for consideration. Besides Clifton Meador’s work, InterArts was also represented in the final contenders by the InterArts’ 2012–2013 visiting lecturer Inge Bruggeman’s book the infinite between us; and the work What You Will by Aaron Cohick, who had a special feature back cover inserted artists’ book in JAB31, which is produced at CBPA. That makes three times in a row that Interdisciplinary Arts has been represented in the final selections for this prestigious award: CBPA’s Brad Freeman (editor of the Journal of Artists’ Books) was a 2011 finalist, and Meador made a previous appearance in the winning lineup in 2009. 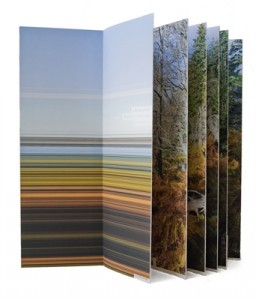 The jury also awarded three Special Recognitions of Merit, with two of those going to InterArts/CBPA visiting artists:  Maureen Cummins, a frequent visitor to CBPA where she has led graduate level letterpress workshops, received the recognition for her artists’ book Accounting. Marlene MacCallum, Professor at Memorial University of Newfoundland, received the award for her work Glaze: Reveal and Veiled. MacCallum is also a collaborator on the Insight Development Grant team, working with finalist Clif Meador of CBPA to explore the potential of multiple-producing formats, such as artist’s books and time-based new media (film, video, new digital and electronic technologies, audio) in an effort to explore new ways to enhance interaction with prospective audiences using digital applications.