Folleh Shar Tamba was a regular on the independent film festival circuit before coming to Columbia’s InterArts MFA program, and the full-time course load has not slowed down his filmmaking one bit.

He has received notice from critics for his earlier works The Triangle of Death (94 mins., 2009) and The Line of Departure, (28 mins., 2011) both documentary pieces dealing with aspects of twenty-first century American military exploits and missions. Tamba’s current project, An Oath Keeper, continues his exploration of military themes. And, as a full-time student in Columbia’s InterArts Media program, he has found a wealth of resources and expertise to help him in creating another one of his complex and unsettling visual pieces.

“I’m excited to be working with Columbia College students in the Film and Video department who are specializing in sound for cinema on my new film,” said Tamba. “In the Interdisciplinary Arts Department, we are always looking for new ways to collaborate as we create our art, both within and outside of our preferred areas if expertise. I found I was going to need help with creating the sound design and mix for my latest film. Film and Video Professor Diego Trejo Jr. recommended two of his best students, Nealle Dipaolo (senior, audio arts and acoustics major) and Adam Mizner (senior, focusing on Audio for Visual Media) to work with me on the project.” 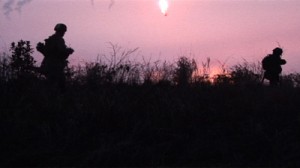 Poster image from “The Oath Keeper”

The documentary, An Oath Keeper, is almost ready for festival submission nationally and internationally. Its storyline follows a young Wisconsin man who takes an oath to enlist in the United States Marine Corps. He keeps to his oath, and serves his country honorably. When he returns to his quiet hometown after the Iraqi war has ended, he picks up mixed martial arts to deal with stress. As he reflects on the past, he finds ways to put the Iraq war behind him, in order to start a new life, one which he had dreamed about while he was in combat.

Promoting the film is the next hurdle for Tamba to tackle, in order to get the film noticed by critics and festival jurors. “I’ve been using QR Codes to promote the film. When people scan the code, it will link over to a trailer for the new work.”

To find out more about the filmmaker, and earlier documentaries by Tamba, click here.