For Public Consumption is one of Chicago’s latest pop-up installations, currently residing at Block 37 in downtown Chicago. Occupying a prime spot at street level, the works are being viewed by passing shoppers, workers, and tourists both day and night. Created by students in Columbia’s Interdisciplinary Arts and Media MFA and Interactive Arts and Media BA programs, the show has transformed an empty storefront into a public art gallery, with rotating video and interactive media pieces that address the act of living in a public environment. 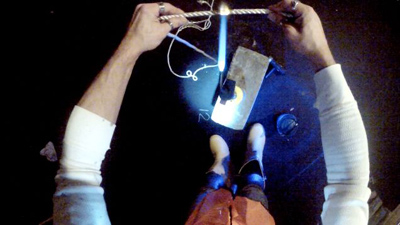 Dennis Michael Burke’s piece was inspired by the myth of Hercules and the Twelve Labors. His digital theatre production bears the same name as they myth, and shows the first six of the twelve labors. In Hercules and the Twelve Labors, Burke shares his ongoing visual investigation of masculinity and labor-generated aesthetics. “Conceived through the interpretative lens of the Hercules myth, I’m presenting a mediated and time-based spectacle of image, sound, and text,” says Burke. “My work offers provocative illustrations of the convoluted structures behind interpretation and representation of masculine codes and symbols, placed within the historical and contemporary context of visual narratives.” 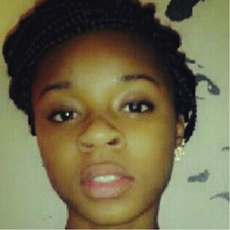 Still image from Portrait of Chicago by Folleh Tamba

Folleh Tamba’s video work was inspired by the Orson Welles’ quote, “We’re born alone, we live alone, and we die alone. Only through our love and friendship can we create the illusion for the moment that we’re not alone.”

Says Tamba, “Portrait of Chicago is an experimental video art installation that explores the diverse faces of one of the most segregated cities in America. There are 200 neighborhoods in the city of Chicago. Portrait of Chicago is my attempt to reinforce our social contract, the collectiveness of our humanity in a diverse city that is sometimes alienating.” In the work, Tamba captures a close-up shot of a resident from each neighborhood saying “HELLO” in English, and whatever other language they speak. The video plays on a loop, creating the effect of all 200 hundred faces fading into one another, which Tamba uses to signify our oneness.

Additional artwork stills and descriptive narratives, including the headline image on this newsfeed by Tom Ruiz and Justin Botz, can be seen here and at the Block 37 storefront windows on State Street.