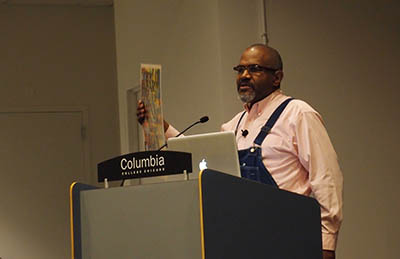 Amos Kennedy brought plenty to look at to his lecture last Friday night at Stage Two. Examples of his activist posters, some experimental pieces, and posters he described as “just what I do” were on hand for all to see at what was the kick-off for a three-day workshop at Columbia College. 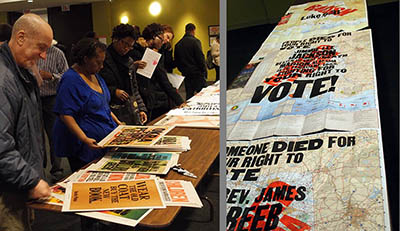 Kennedy is visiting the Center for Book and Paper Arts (CBPA) and Center for Black Music Research (CBMR) to lead an interdisciplinary arts department graduate seminar in letterpress printing, drawing on the extensive collection at the CBMR archives.

He was introduced by April Sheridan of CBPA, and Monica Hairston O’Connell, Ph.D., Executive Director of CBMR. O’Connell, who professed her secret desire to be a letterpress printer, spoke of the collaboration between the two Columbia College Centers as an opportunity to reanimate and reactivate the CBMR archive. Through the workshop uniting activist letterpress printing with the archives, the posters created would “serve as collective memory to rediscover stores behind the music.” Said O’Connell, “Black expressive culture is American culture, and Black music is the engine of Black expressive culture.” 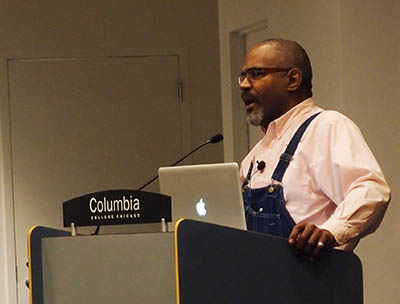 Kennedy began his talk by saying how at home he was at the Center for Book and Paper Arts, since he first learned letterpress at Chicago’s Artists’ Bookworks, which later combined with Paper Press to become the Center for Book and Paper Arts. He compared letterpress printing to the popular 12-bar blues chord progressions, and how both involve repetition as well as working within limits and knowing the rules. In both forms, once the rules are understood, the artist can experiment within the limits, using “artful navigation to transcend the limits.”

Kennedy believes posters are the ideal activist vehicle, since they are inherently “rude.” They get noticed because they are in your face, uninvited, surprising. “Printing is protected by the U.S. Constitution,” said Kennedy, “and by its nature is provocative and political.” He hopes this weekend collaboration will help grow the archives, and bring out the story of the “little guy,” and important people in American musical history who may have been overlooked. “It’s the little person who gets overlooked, but the little guys are the ones who make up society.” Kennedy believes putting the message and image into the hands of the people is the key to activism. “In the end, neatness and slickness are not as important as dialogue and immediacy.”

Kennedy has recently moved to Detroit, MI after working out of a nondescript storefront in Gordo, Alabama for years as owner and operator of Kennedy Prints. He has been profiled as the subject of the documentary film Proceed and Be Bold! and is one of the country’s leading letterpress printers, having joyfully and exuberantly printed thousands posters for commercial, cultural, and activist organizations and causes. The workshop continues at the CBMR and CBPA through this weekend, and the letterpress results will be collected into sets, as well as exhibited later in 2013.