This past November, the video work of 2009 InterArts MFA Stacey Stormes was featured in an exhibit at Le Centquatre in Paris, France, as part of the Computer Art Congress 3. CAC.3 is a conference of artists and researchers, under the auspices of CiTu Paragraphe and europia.eu, and organized by academics Prof. Khaldoun Zreik and Robin Gareus. The first conference, CAC.1, was in 2002 in Paris; and
CAC.2 was held in 2008 in Mexico.

The call for entries for CAC.3 invited artists, intellectuals, engineers, and scientists to share and discuss their imaginations, creations, inventions, and visions of post-digital art, and offer artistic and intellectual performances designed in the context of a Socio-Technological Innovation Perspective.

Stormes’ new work Plastic, OK? was a perfect fit for the conference, whose organizers and attendees were looking to harness artistic and innovative experience to help rethink the current technological and environmental challenges of the twenty-first century. 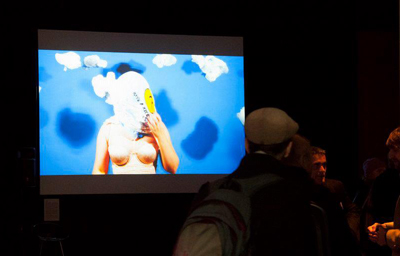 Plastic Ok? is a direct reaction to the BP/Deep Water Horizon oil spill. Stormes is a Florida gulf coast resident and conservationist, so the the gulf spill has had a personal impact on her. As this week’s civil lawsuits prove, the devastation of over two years ago is still largely unmeasured and unresolved. Yet rather than decreasing offshore drilling, oil companies are expanding, moving their explorations into ever more sensitive areas worldwide.

“Rather than insisting on sustainable options for our energy and the products we consume, we continue do too little to reverse course,” says Stormes, “We continue electing officials who support the industries that are harming us, paying little attention to what goes into manufacturing, progressing on an unsustainable path, and as a result, we end up awaiting the next man-made disaster as inevitable, rather than working to prevent its occurrence.”

Stormes feels that the ubiquitous plastic bag symbolizes this epidemic, due to its direct connection with oil. They are made from polyethylene, which is derived from petroleum. “The inability of the plastic bag to biodegrade, the massive amount of bags littering our environment, and the fact that less than 1% of plastic bags are recycled, make it clear that they are a key part of the world-wide environmental problem,” she says. As part of her effort to limit her consumption of bags, Stormes collected and repurposed bags from friends and family, and all of bags used in her video will be reused as materials in related work.

The overall experience has been positive, and one that Stormes hopes can increase the visibility of the environmental issues she cares about. Says Stormes, “This was my first international showing of work, and I was honored to be a part of such an amazing group of artists. I’m looking forward to CAC.4 next year, in Brazil!”