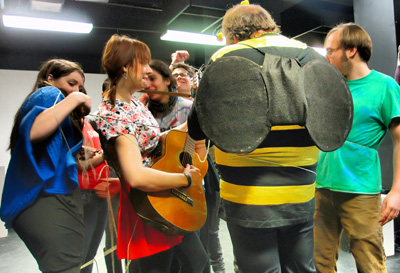 Jenny Magnus, founding co-Artistic Director of Chicago’s Curious Theater Branch, is leading this spring’s Media Performance graduate students through a rigorous semester of readings, collaborations, experiments, and public performances. The syllabus description states from the get-go that “Students in this course will try everything, gain mastery over a few things, and learn by doing in order to produce experimental work.” Less than a month into the semester, participants in the course are pulling out all the stops in preparation for their first public performance on February 25.

Preparation for the public performance included three weeks of “thought experiments” based on three different word prompts: Muchness, Stillness, and Collision. Each experiment session included collaboration between book + Paper and Media MFAs; performance experiments, both with and without media; and lively discussion and critique and participants act as supporters and devil’s advocates for each other’s work and ideas. Supplemental readings for the course range from Scott McCloud’s Understanding Comics, to the NerdyDanceExperiment blog site, to Twyla Tharpe’s The Creative Habit. Discussion topics touch on many performance arenas, from visual narrative to issues of performance in a mediatized culture.

“Jenny Magnus is one of the best educators I’ve ever had the privilege of studying under,” says first-year Media MFA Justin Botz. “I’m really excited to be taking Media Performance with her.” 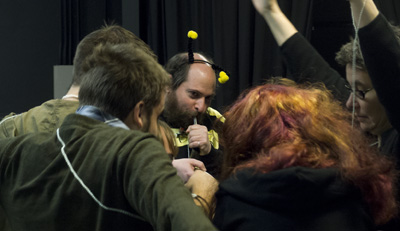 The first open presentation of work from the course will be on Monday, February 25, from 12:00 noon to 5:00 p.m. in the 1104 South Wabash second floor Raw Space. The event is free and open to the public, with open seating. For more information on the course from a current participant, click here.