Chicago’s longest-running multi-arts fringe festival follows up its opening gala performance of Full-Moon Vaudeville with a month chock-full of cutting edge and experimental performance work. RhinoFest, as it is affectionately known in the Windy City, features works in theater and performance from Chicago companies and national artists alike. It is unique among national fringe festivals in that artists are never charged a fee to participate, and each year the programs Rhino presents are individually curated, rather than selected on a lottery basis. 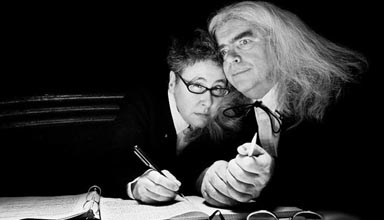 Magnus and O’Reilly in performance.

One of the works in the month’s rotation is Magnus’ and O’Reilly’s All the Ways to Hidey Hole, another entry in their 20+ year long series of duets they call the Madras Parables. Written and performed by Jenny Magnus and Beau O’Reilly, the piece drops in on these two writers’ ongoing collaborations. “The piece is basically about two writers who are ‘simplicitists,'” says Magnus, “who are looking for ways to speak that work aloud, together and apart. We watch them working on the most difficult thing—direct simplicity.”

Also appearing at RhinoFest this year on a rotating schedule are works by Ian Belknap, Billy Goat Experiment, Brain Surgeon Theater, KellyAnn Corcoran, The Neo-Futurists, School for Designing a Society, Sweetback Productions, The Whiskey Rebellion, and many others. The festival continues through February 17, 2013 at Prop Theatre, 3502-04 N. Elston, Chicago. For complete information, schedule and tickets click here.