Last week’s roundtable discussion “Tactics & Technologies: Artists’ Books and Means of Production,” covered a wide array of projects, methods, and materials being used by today’s book artists as they contend with various forms of new media, and their rapid transition into “legacy technology.” The panelists all agreed that it was fascinating to watch how quickly new conventions emerge and become established and accepted, absorbing and replacing earlier conventions. The four panelists each discussed the topic from a different angle, showing recent work examples. 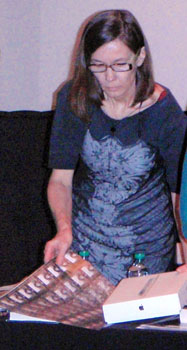 Doro Boehme (SAIC special collections) presented images of an iPad app in process, as well as examples of recent completed work to demonstrate how artists’ books have always been at the forefront of expanding media. Boehme posits that new media is always in sync with the creation of artists’ books, with new forms enabling any reader to become an active tagger, and co-producer of content. Author Steve Tomasula discussed his recent publication TOC, a New Media Novel, which was ten years in the making. Discussing the question of whether TOC is an artists’ book, or interactive media, he pointed out that “TOC retains the intimate, one-on-one experience that a reader has with a book, even as it draws on the power of other art forms to immerse readers in an altogether new multimedia story.” Steve Woodall (Director, CBPA) talked about Expanded Artists’ Books, an NEA-funded electronic publishing initiative recently awarded to CBPA. Woodall pointed to the long-standing relationships visual artists have to rapidly changing commercial, communications, industrial, and digital technologies for both creative production and experimental distribution.

In her presentation on her visual artwork within the context of changing technology, Johanna Drucker maintained that the book and media world is not collapsing, but rather it is combining. Drucker embraces the absorption of earlier forms of media into newer ones, and enjoys using ever changing media forms to create her work. “Artists’ books are baffling and bewildering, and have always been so: ‘I know this does something, but what? How does it work, what does it do?’ is a typical reaction to almost any form of artists’ book,” says Drucker. In her view, changing technology creates an ideal environment for creative, infinite, and obsessive writing. 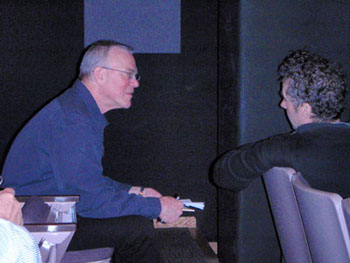 Each one of the panelists has a sustained engagement with the book form, and presented a lively and engaging discussion of their evolving relationships to different technologies—from past developments (letterpress and offset printing), to the distributed materiality of the present (print on demand, tablet, mobile computing, cloud-based services), and into the augmented realities of the future.