The upcoming retrospective exhibition of the work of writer, typographic poet, and scholar-critic Johanna Drucker will include a special edition facsimile of her artists’ book From A to Z. Interarts MFA candidate and Book + Paper Offset Fellow Claire Sammons was instrumental in the production of the facsimile, which was timed to coincide with the opening. 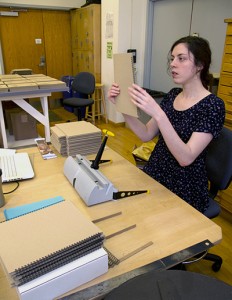 The unique project was completed earlier this summer, under the direction of Journal of Artists’ Books editor Brad Freeman. 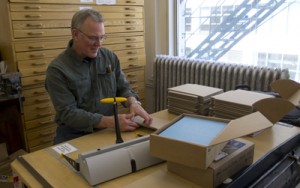 Drucker provided some background on the genesis and creation of the original From A to Z:
“This book came directly out of my experience working as the staff typesetter at the West Coast Print Center between the winter of 1976 and fall 1977. Set up to provide low cost printing services for the Bay Area literary community, the Center was a hub of activity, a significant node in a vibrant network of emerging writers and publishers. Pretty much everything I learned about poetry came from working at that job, which means I may have learned as much about poets than about their art. But I had the chance to observe contemporary writing up close and to see how a scene operated under the pressures of work and sex and money and ambition and betrayal. I recorded all of that in this book, though some of the details are obscured and much of the account is encoded rather than stated explicitly.

“The book was not written as much as it was composed—in the stick, on the page, from sorts and leftovers in an elaborate scrabbled game of social critique and parodic play. The task was simple, the parameters defined: I wanted to use the type in forty-some drawers of type once and only once and make a text that made sense. The book is in every sense a total work, completely integrated. Every element carries meaning and adds information about the characters, their work, status, gossiping exchanges, attitudes or activities.”

The exhibition runs from September 6 through December 7, 2012. 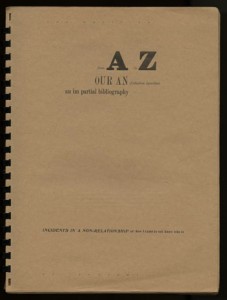