Three members of Triple Canopy, a self-described “geographically diverse editorial collective,” brought their ideas on publication in the expanded field to Chicago for a series of workshops. Through the initial kick-off lecture and subsequent workshops, participants were treated to a revealing tour of the behind-the-scenes decisions and machinations involved in their public event presentations, as well as the creation of an online arts magazine that seeks to adapt the conventions of a general interest magazine to the 21st-century’s online environment.

One of Triple Canopy’s main cultural concepts involves “slowing down the Internet,” both through adapting the web to artistic practice, and creating a rhythm of release that allows the space and time for artistic discourse to take place. Discussion in the workshop unpacked ideas around the internet as an event, as opposed to a place or “folder,” and what this means as far as archiving. 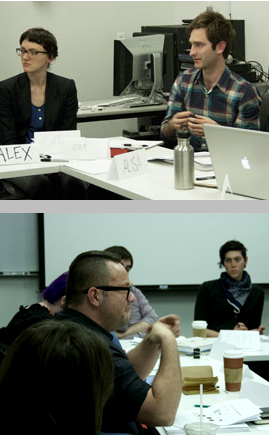 Collective members Peter J. Russo (Editorial and Program Director), Adam Florin (Senior Web Developer), and Colby Chamberlain (Senior Editor) shared with participants their challenges in maintaining the integrity of what has evolved into a multitasking brain trust, along with ideas on how to move forward into the future in areas of fund raising, readability, distribution models, and content management.