The Potluck is a creative community building project, which lifts its name from the custom of a collective meal to which everyone brings a dish. It’s about conversations, share of creative tools, an inclusive exploration of community and “creative placemaking” in cities, like Chicago, which are increasingly plural.

Initially imagined by London-based international arts company motiroti, Potluck: Chicago is the 2011-2012 Critical Encounters artists-in-residence project at Columbia College Chicago. Alongside Columbia, a range of partners have joined the project early on to contribute ideas and planning—including The Dorchester Projects, the En Las Tablas Performing Arts Center and the Jane Addams Hull-House Museum. 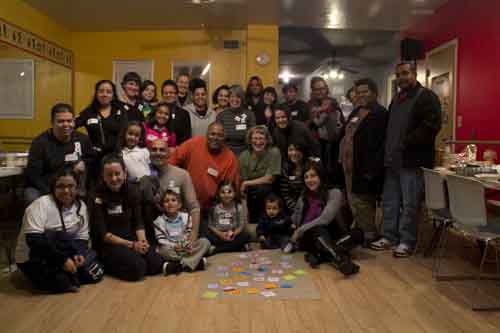 The Potluck is a flexible, participant-centered  process responding to the common interests of the network and communities involved, and includes skilling up students, prototyping new works in public spaces in the city, and producing materials and creative campaigns. Participants are combining to offer their thoughts and ideas around “How can we harness the city’s diversity for the common good?”

Read more about the project here, and at our Facebook page.

Opportunities are now open for Columbia students to join the Potluck! Applications for the Spring workshops are available HERE.