As we prepare the world for the 2011 edition of Printers’ Ball, It’s Alive!, July 29, the country’s largest celebration of print culture, featuring over 200 publications for the taking in addition to art and music performances, we are announcing the official release of a collaborative artbook created on the occasion of Printers’ Ball 2010. The artbook features poems and art by lit figures such as Audrey Niffenegger and Kathleen Judge.

In the late spring of 2010, 20 members of the Chicago Printers’ Guild and 20 members of Chicago’s writing community were invited by Poetry magazine and the Center for Book and Paper Arts to participate in an “artbook” project to commemorate Printers’ Ball: PRINT <3 DIGITAL—a portfolio of broadsides to showcase the strong visual and literary cultures of the city. 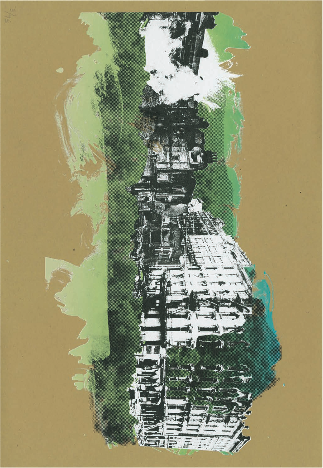 On June 1, the Center hosted a mixer for the two groups. Jason Teegarden-Downs had brilliantly suggested that along with their poetry or prose piece to be illuminated, the writers should bring an object that best represented their work. We ended up with some interesting things on the table. A snuff box. A jar of rubber cement. A darning egg. A vintage bracelet. An expanding sponge shaped like a truck. The printers chose an object that appealed to them and that’s how the collaboration began. 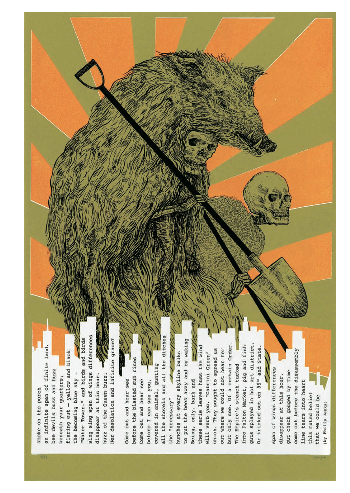 After the printers laughed or asked questions, they disappeared into their studios for a month. When they emerged with some very amazing prints, we hung them up at the Center during the night of Printers’ Ball and celebrated everyone’s efforts with a reading extravaganza in which almost all of the writers read their work.

To keep them together, we designed a simple portfolio, which employs and exposes some of the traditional materials of bookbinding. Even a simple portfolio for so many people took a lot more work than we thought to complete. And now, a year and several students and volunteers later, we have ourselves a lovely stack of words and pictures, humbly presented for the world.

Each of the participating writers and artists will receive a portfolio and the remaining ten will go to collections around the world. If you want to get an idea of what they did, please open the link—PRINT <3 DIGITAL. One of the objectives of the artbook is to demonstrate one of the ways that print and digital media compliment (not kill) each other. This otherwise hard-to-find, fine-printed portfolio is brought to life with one computer click. But if you want to see one in person, stop by the resource room in the Center or the library at the Poetry Foundation.

ADMISSION: All events are free and open to the public, unless otherwise noted