The Center for Book and Paper Arts is please to announce a Typography Symposium, to take place June 1-4, 2011. Unless otherwise indicated, events are free and open to the public. 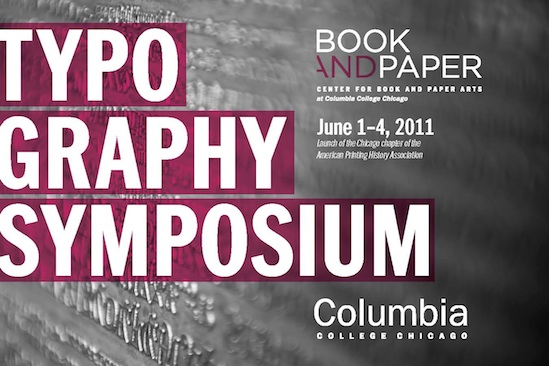 The title of this lecture is also that of a book by Johnston and Steven O. Saxe, published last year by Oak Knoll Press, which presents the work of William E. Loy, to whom we owe a great deal for his documentation of the important type designers of his era. From the prolific Herman Ihlenburg, who worked for MacKellar Smiths & Jordan, to William Page, the wood type manufacturer who skated on the milled planks in his stocking feet at night, Johnston will explain how these men worked and relate fascinating anecdotes about their lives.

Improvised Design in the Colonial Era

Using type and material in the shop we discover in a hands-on fashion how early American printers achieved striking and distinctive effects in their bookwork with limited resources. We will recreate pages from 18th century American books using type and ornament in the studio and learn how expedients, such as decorative material made out of punctuation, came to the aid of the early typographers in the American colonies. We will also explore how these strictures created a distinctly American aesthetic, manifest later in the work of Updike, Rollins and Dwiggins, three of the most noted American designers of the first half of the twentieth century.