Interdisciplinary Arts graduate students Jenny Garnett, Laura Miller, Nic Ruley, Nick Sagan, Michael St. John, and Don Widmer have been hard at work this semester developing experiments that expand their capabilities for performing with media. Through the course, Performing in Artificial Space, taught by Paul Catanese, the students have been conceptualizing the recently upgraded Raw Space / Black Box as a laboratory to develop six unique performances which address a diverse range of concepts and narratives. 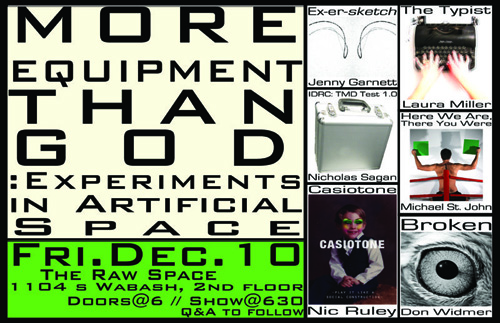 You are invited to join us on the evening of Friday, December 10th for a performance of the results of this intriguing form of research; each segment is approximately ten minutes in length. Immediately following the performance, viewers are invited to engage in a question and answer session with the artists.

Ex-er-sketch is a performance experiment that is part of a larger artistic research inquiry to combine drawing and movement. This particular study consists of a series of exercises performed quickly and to the point of exhaustion along side software that creates a real-time drawing by tracking points on the body. As the body and endurance deteriorates, the drawing accumulates.

The Typist – by Laura Elayne Miller The Typist is a multi-media performance about a woman’s journey through time travel as she attempts to write her memoir.

Casiotone – by Nicolas Shawn Ruley Casiotone is an autobiographical sketch that explores the concept of creating a contemporary queer identity. Drawing from both the cultural and the satirical, the performance adds new media elements to a cabaret style in order to magnify the personal within the sociological.

IDRC: TMD Test 1.0 – by Nicholas Sagan The Institute for the Department of Research Center’s Temporal Mechanics Department presents this first event as part of an ongoing series of publicly viewable experiments. It becomes increasingly important to control the theoretical predictions and to fully understand the present theoretical uncertainties. While progress on the DTI has been made, many kairological corrections are not available in one event generator: therefore the need for developing a public outflow for these experiments becomes paramount.

Broken – by Don Widmer Dramatic elements in Broken are inspired by Pacific Northwest Coast Native American culture. A masked performer presents his story to the audience through movement, image and sound. Handmade paper will be used as a prop, sound object, and dramatic device. This work explores the concept of lost identity and cultural alienation.