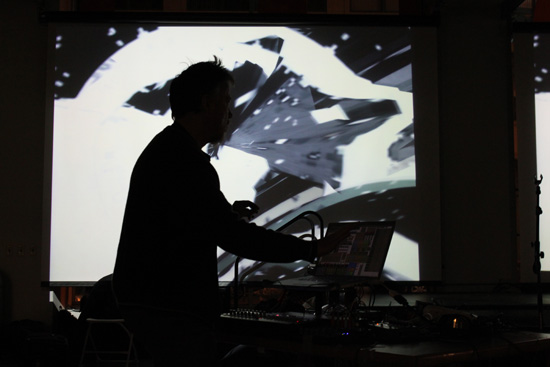 1. You work as a scholar, a practicing artist and a live cinema performer. Where do these worlds collide in your work?

The different facets of my work all intersect in my role and identity as an artist. In my teens my conception of what an artist actually did was limited to the traditions of drawing, painting and sculpture, now we see artists redefining artistic practice across wide and disparate fields. The idea of an isolated, hermetically sealed discipline can be useful in the training of specialists but can be detrimental to discoveries and advancements of all kinds. My work as a ‘live cinema performer” is a synthesis of studies across video, sound, dance, performance, music composition and painting. My scholarship stems from a curiosity about historical precedents and new scientific possibilities – teaching springs naturally out of this creative work, and as much as possible I have sought to integrate the classroom and the exhibition space as one unified experience, whether it is a theater, a gallery, website, storefront or parking lot.

2. If someone reading this interview has never seen or experienced a live cinema performance, how would you explain the medium in both its media and performance elements?

As in many other art forms individual approaches can be very diverse. My definition is that Live Cinema is a screen-based work that might be edited, reassembled, mixed, streamed, animated and/or processed by a single performer or group of performers. The performer can be foregrounded or completely hidden from audience view. I would also include some video with dance, spoken word, theater and musical performances in this category but not all – there needs to be an active element of live media manipulation or structuring present.

3. Can you briefly tell me about the history of NoiseFold and your collaboration with Cory Metcalf ?

Cory and I have been working together since 2003 and formally began our NoiseFold collaboration about 4 years ago. Before this I was making installations and performances combining many different video techniques including live action narrative, concrete text, animation, image processing, instrumental performance and song. I abandoned this approach in the spring of 2003 to focus directly on live noise systems – The result was a very visceral audio visual experience utilizing complex feedback structures. This led directly into looking at Artificial Life approaches to live cinema. Cory’s innate skill as a media performer and easy embrace of mathematics, metal and esoteric philosophy made him a natural creative partner.

4. At the recent NMC live cinema event, you mentioned that you were performing on your own — instead of with your usual collaborator Cory. Can you describe any differences or challenges you experienced in this solo scenario?

While I have done a lot of solo performance work, my focus for the past four years has been an exploration of the networked duet. The NoiseFold instrument typically consists of 2 or more interconnected computers controlled by a sensor array that allows us to perform the sound and image in a very gestural way similar to a Theremin. As NoiseFold has evolved, we have embraced our network approach to such a degree that we are constantly sharing each others data, allowing the two of us to shape and control each others sound and image. This is the equivalent of 4 arms and 2 brains multi-tasking within a very large field of aesthetic options hurtling at the velocity of 30 frames a second. Cory and I have grown accustomed to this increased capacity, which is exemplified by the 2 side-by-side screens, which at times form one larger contiguous image. Paradoxically our interactions as performers are both carefully rehearsed and loosley improvised, requiring an absolutely engaged state of awareness – our approach is far more aligned to the risks taken in instrumental music performance as opposed to the live mixing that most VJs and DJs are doing. Performing in a solo context is fun and has its own rewards but the NoiseFold duet is more challenging and expansive in everyway. 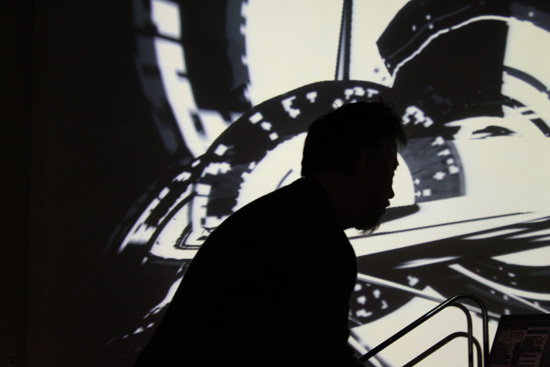 5. With live cinema performance straddling entertainment and installation, do you find audience reactions vary from culture to culture and venue to venue?

This is a great question. Absolutely! While live cinema does have a historic tradition, it is largely unknown to either the general population, the art-going audience or the club kids. This lack of codification provides an open door to presentations in all sorts of venues and contexts. NoiseFold premiered at a very high profile international video festival in Casablanca, Morocco. At the time we were surprised at the enthusiastic embrace we received in North Africa, but on reflection, abstract mathematically driven visual forms that float and hover in deep droning sonorities are perfectly suited to the aesthetic traditions of the culture – we could not have been more happy at this discovery. We have subsequently presented at art fairs, new media exhibitions, contemporary music concerts, art galleries, teen art centers, science museums, science research facilities, botanical gardens and what I would call the post-rave electronic music circuit – wildly different audiences that have kept us from adopting a routine approach or pedagogical method when contextualizing our work. The intensity and perhaps novelty of our approach pretty much dissuades those looking for party entertainment – hopefully we are helping to remap a few neural pathways.

6. What kind of practice, preparation, or rehearsal time goes into your live cinema work? Do you see this as similar or different from other performance mediums?

I think many live cinema performers spend much more time collecting or creating video clips and much less time rehearsing transitions, edits or other live performance actions. Virtually none of them consider theatrical staging. We take a more rigorous and perhaps traditional view of performance. While our audiovisual language is represented by autonomous forms that can act independently from the human performer, we have programmed an instrument that can be somewhat difficult to play and is dependent on us to articulate and often tame the chaotic behaviors of the system itself through physical gesture. In short, the performer “cannot drop the ball”. Our process combines systems programming, composition and aesthetic editing, individual performance rehearsal and group performance rehearsal. This process has always embraced improvisation and has loosened up over time as we learned to stretch out and jam with the system. NoiseFold is really involved in a hybrid form so our actual practice is an amalgam of computer programming, and filmmaking on one hand, and physical theater and music performance on the other. In the end, our methods are very similar to the way more experimental rock and jazz bands approach improvisation, composition and performance, we just lead with our image-making out front.

7. Live cinema presents a broad range of performers. How do you think this diversity affects perceptions of the medium?

There are various schools and genres that fit within the live cinema context. For example, the tradition of visual music performance and the creation of various color organs and performative projection systems go back hundreds of years. I find the diversity of technical, conceptual and disciplinary hybrids really liberating. I suppose one negative is that the casual observer might see one or two performances and assume that all live cinema is reflected by a very limited set of aesthetic approaches. In a very real way much of the art world is not particularly savvy about the distinctions between a club VJ set and other kinds of live cinema performance. The background images performed in nightclubs, concerts and raves is often flashy but mostly full of empty calories, it does little to further the medium or suggest the real sophistication attained by leading practitioners.

8. LASTLY, Do you see live cinema performance emerging as a more mainstream entertainment feature in the coming years?

It could be, though I wouldn’t know if this is ultimately a good thing for artists or not. The fact that we have been deeply immersed in video games for several decades might indicate why our audience instantly responds to this high intensity audio-visual approach. Critics, curators and the general press haven’t really caught up yet – but in my mind it’s a moment ripe with possibility. Something Jack White of the “White Stripes” said a few years ago roughly paraphrased as, “the laptop is the new guitar” – While he was likely referring to the use of computers as a garage band recording tools, I interpret this in a very literal way and I think this is echoed in Jon Cates exaltation of “Dirty New Media”.